For more information, write to us@firesign.co.uk

Fired in the kiln of lockdown, Recast is a dub-hearted reimagining of the band’s 2020 EP Bronze.

Over nine tracks, fire_sign remix their material drawing on a wide variety of influences and styles ranging from acid to dark ambient. While Make Me in Stone is coloured by a love of old Rhythm & Sound and Deepchord records, the slow pulse of Too Much to Carry is inspired more by the synth-wave of acts like Pye Corner Audio.

In Sugar Dream, the band present their first ever ambient piece, a nod to their fondness for artists like Brian Eno and Celer. Elsewhere, they channel bold drum n bass accents in They’ve Spoken, setting off Shadow’s grand percussive machinery to spectacular effect.

“Some of our favourite records have been remix albums, and we’ve always enjoyed remixing our own stuff,” said fire_sign.

“This was an opportunity to develop the other less structured side of our music – something we started doing back with our first release, Sweet Oblivion.”

Recast was mastered in Berlin by Calyx and will be digitally released by 4am City on June 28, 2021.

Title track Bronze explores a wish to be made from something else; a material instilled with every quality you lack.

Emboldened by your new non-skin, you feel self-assured and resilient enough to move among people without disappearing into an otherness.

But confronted with a real crowd, the illusion of strength quickly shatters, and you find yourself once again reaching for a trusted escape.

Journey with fire_sign as they flee ‘the people sea’, trip over past hurts, wander through a deserted factory haunted by powerlessness, and find their way out of an impossible romantic entanglement while walking London’s iconic streets.

Let yourself be swept into the comforting embrace of strings built around Sarah’s solo cello as you dry your eyes on a rich sonic tapestry daubed with synths of every colour.

And whatever sad thoughts Bronze brings to your mind, remember – “don’t let them dim your light”.

8-track EP “Bronze” was mastered in Berlin by Calyx and will be digitally released by 4am City on September 12, 2020.

Listen to the Bronze EP sampler.

British duo fire_sign continue their tradition of fine home-crafted electronica with the release of their new EP “Bleeding,” created in response to the devastating terrorist attacks that erupted across the UK in 2017.

Recorded London, title track “Bleeding” walks in the footprints of 20th-century protest songs, uniting haunting vulnerability with a patient strength rooted in an unassailable belief in the inherent goodness of humanity.

Bleeding’s moving tale unfolds over an ambient drone created from raindrops of piano, guiding the listener from the disruption of a security taken for granted to a hope-filled yearning for peaceful coexistence.

Occasional crackles create a sense of displacement while minimal ticks of percussion, chiseled from a live piano recording, carry the track forward into a purposeful stride.

An emotive and intimate vocal performance expertly conveys the sense of shared pain which flows through the lyrics. Detuned backing vocals, symbolic of the inner strength that can be found in times of adversity, add supporting power to the lead.

“Bandage” follows as an abstract deconstruction of Bleeding’s sorrow, breaking the vocal down into pieces before healing with an ethereal climax.

The 4-track “Bleeding” EP, mastered in Berlin by Calyx, will be released digitally on 22nd November 2019 on the band’s own 4am City label.

Accompanying the release will be a video made from a series of animated drawings by fire_sign based on the original cover art.

Check back soon for gig details! 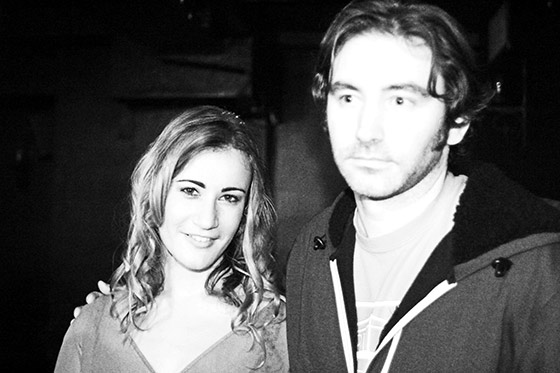 Enter your email address below to keep up to date with the latest fire_sign news, and we’ll send you a download link for our exclusive mix!